Last week I headed to Southern California with my rug hooking buddy, Mary Lynn. This is our second year to attend this getaway at Gene Shepherd’s studio, and it is just a delightful experience all around. I wrote a little more about it on my other blog. Mary Lynn and I go a day ahead of time to go to Crystal Cove and visit the tide pools (and eat beignets by the shore 🙂 )

This year, I wanted to take a break from the intensive detailed work on the rug I’d been working on. I had the idea to do an “improv” rug–not drawing a design ahead of time, but having a rough idea of what I wanted to do. I simply wanted to use the “dull” primitive wool that I had been collecting as the background, and add splashes and lines of the bright colors that I like so much. I had knitted a couple of scrap rugs like this, and I liked the way they looked.

I had the idea to make a larger rug than I had ever worked on, so I laid the linen backing out on the living room floor. I decided to try to make it 4’X6′. 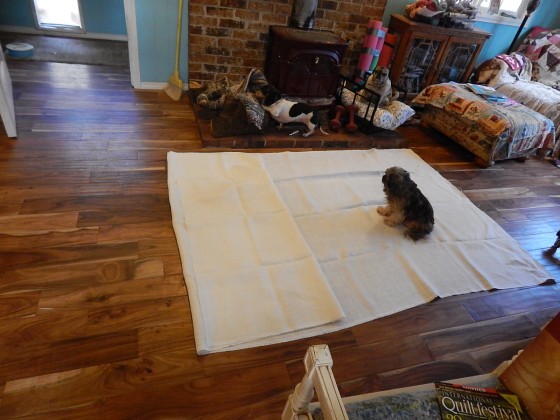 When we got to Gene’s studio, the first item was to get a brief consult on this rug. I needed a color for the background below the elephants (that bird won’t be there,) and it had to contrast well enough with the lion, the cross, and the green leaves. Right away, Gene came up with the idea of purple. Perfect! I have some dull gray-purples that will work well. 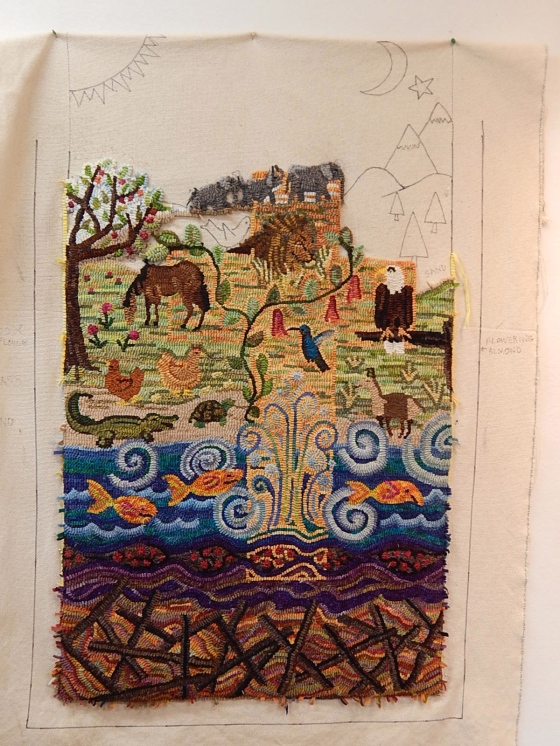 As I started work on my “improv rug,” Gene mentioned that my ring and my bracelet were great design sources. Hmmm. I liked that idea. Already I was growing a little bored with the wonderful straight line hooking that I had envisioned. I had also had an idea the night before of adding a big spiral to the rug. 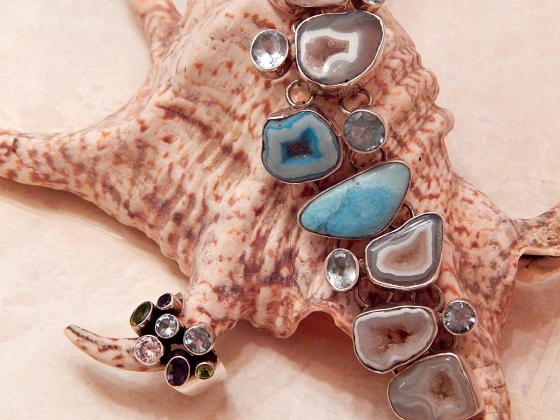 So that night I went back to the hotel and added some circle patches and three big spirals to my sketch (that previously had only had blotches and lines to indicate the colors I would add.)

The next day, someone came up with the idea of adding “seaweed” and I added the triangles, because I like triangles, and also because one of my favorite shells is triangle-shaped. So I added these to the sketch. 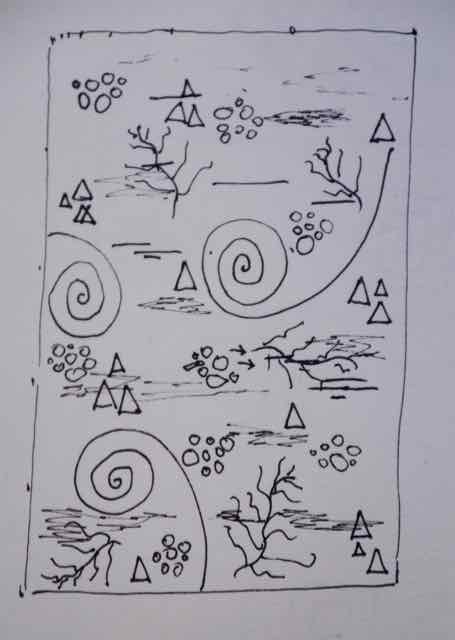 Then it was time to put pen to rug, and I drew in all these motifs. I really like it. Its funny, because before I left, I spent a lot of time drawing a “tide pool” design. Mary Lynn really wanted me to hook the tide pools, but I did not want to hook something that “complex.” So this has turned out to be an improv, stylized tide pool rug. I am very happy with it, and have had a lot of fun hooking it so far. 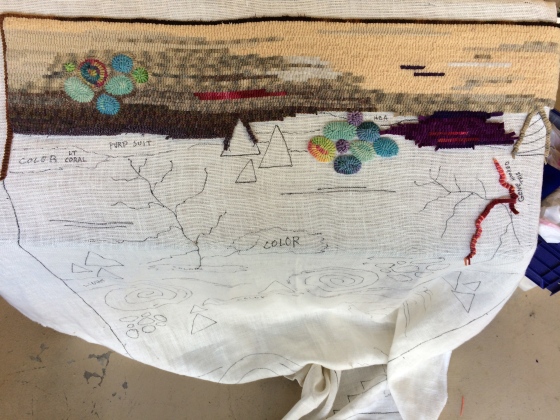 7 thoughts on “Rug Hooking at the California Getaway!”