My learning on the new Juki continues! This week I noticed that the machine was skipping a few  stitches every once in a while. It was really noticeable when I was using the machine to baste a little quilt. BTW, this is a great feature on the machine–you just choose “BASTE” on the LED screen, and then you have the option of slow-medium-fast. It does a really great job of machine basting. After discussing with my BF and long arm consultant, we decided the most likely culprit was that I had the presser foot too high. I had changed out the presser foot to the open toed foot (love!) and I left it a bit higher on purpose, because I wanted to be able to slip this hoop under the foot.

This is the hoop I bought from Martelli.  I really like it. I tend to relax my shoulders a bit more when I use it. I think its most useful when you are doing smaller, closer quilting. When you are doing utility quilting and want to move quickly across the quilt, there is no need for it. 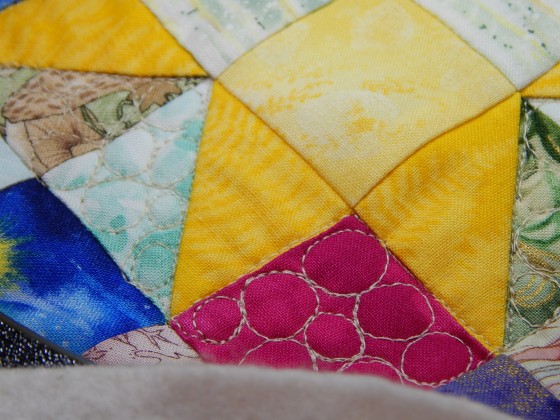 Open toe vs the regular foot. Why would you use the closed foot? I think it might provide more stability if you were doing some pedal to the metal quilting.

So, I set out one morning to SOLVE THE PROBLEM of the skipped stitches.  I should have just changed the presser foot height. But no, I wanted to do a thorough job. So I checked the needle position. The book says the groove in the needle should face to the left. I re-inserted the needle, making sure the groove was EXACTLY facing the left.

Then I wanted to oil the “hook.” That’s the thing on the bobbin case. I don’t think I told you before, but this machine is built so that you never have to oil anything except that hook! Now when I did that, I double checked to see that I had the bobbin placed correctly in the case. Looking at the manual instructions. I got so confused! I thought I was supposed to put the bobbin in COUNTER CLOCKWISE, but the instructions said clockwise. Had I put it in wrong previously, and it was actually working that way?

Anyway, three improvements made, and now I was ready to check out my NEW. IMPROVED. quilting. Only now the machine would not take a single stitch. Not one. I was sure it was my confusion over the bobbin. So I took that baby in and out at least three times, checking and re-checking the placement against the manual instructions. Still no stitches.

So then I went back to the needle position. I looked carefully at the tiny but accurate picture in the manual. Oh. The groove in the needle goes to the left IF YOU ARE STANDING AT THE SIDE OF THE MACHINE, not from the front. So I rotated the groove in the needle to the correct position, and voila! Magic stitches came out of the machine. No skipped stitches at all. My BF assures me that this is all part of learning to use a long arm machine, and is common to all long arms.

So you can see that, although I complained about the Juki manual, it does come in handy for some things 🙂

My friend who is starting the ministry for elderly people in our church needed a quilt to show her committee, so I put the binding on the first quilt I’ve done on the Juki and sent it out into the world. Funny thing about this quilt, Up close, in person, I did not think I had done the color placement right, because I could not see the secondary circular pattern. But it shows up nice and clear in the photograph! 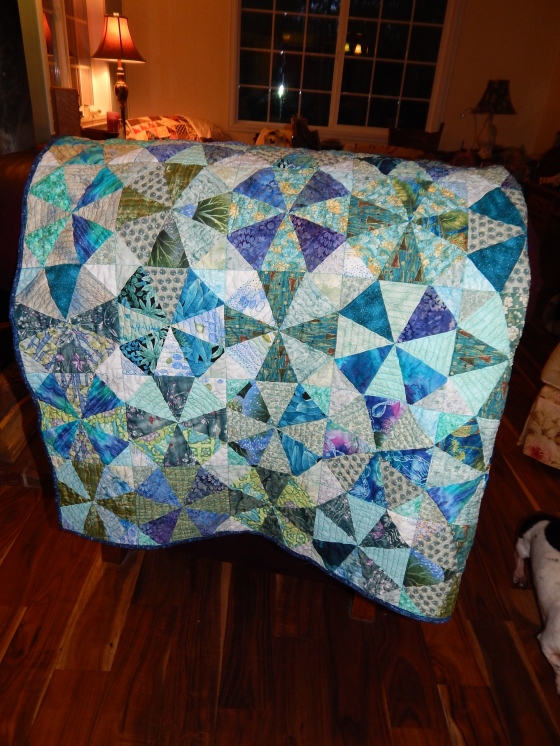 I am off to hopefully finish the second quilt on this Juki. In looking for some other things, I have found more and more unfinished quilt tops! I’m very enthused about getting some of them done and sharing them with others.