Thread! I love it! Black Friday came around and Connecting Threads was having an extra special sale. So I ordered some thread. I ordered more than this but I LOVE this color collection. It makes me want to do some sort of thread painting or a whole cloth quilt using all of these colors.

When I was at Art Quilt Tahoe, I was talking to my teacher about my embroidery and she asked if I’d ever tried Cottage Garden Threads. Nope, never heard of them. Well, that’s because they are an Australian company. But once I saw all the gorgeous multicolor threads they had I was on a hunt. I found a woman on Etsy who sold their threads, and she was willing to make a custom order for me. I splurged and bought 22 different colorways all in perle cotton size 8 (this is just a sample of them.) They weren’t cheap, but the quality is evident. And now I want to make something just using all these gorgeous threads.

In between Christmas preparations and working in the garden I am stitching away. I’ll share some of what I’ve been doing in the next few posts.

Thanks to BF, this quilt will forever be named P.I.N.K.

After sewing this top together, I spent almost a week pondering various ways of enlarging it via more sashing/various borders. Also in the pondering were my thoughts (negative) on sewing together large expanses of fabric, and my thoughts (negative) on quilting large quilt tops vs. my need for a larger quilt if I wanted it as a bed quilt. In the end, I decided I liked this quilt just as it was, and that I did not actually need another bed quilt right now. I love this quilt, and I know it will be my favorite large lap quilt to snuggle under this winter (if I ever get that cold again.)

Can you see the square with the pale blue background, and the lady walking a dachshund and a Standard Poodle? That was one of my scrub tops. I loved it because at the time, those were the two breeds of dogs that I owned! 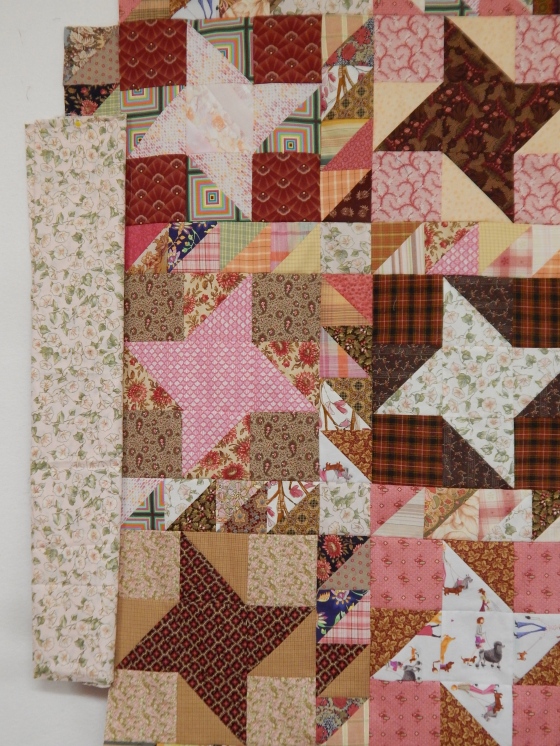 I wanted to make it into a sandwich right away. I had a piece of extra wide muslin that would be just right. However, after laying it out, it just looked like a huge white sheet (it was bleached muslin.) Too new for this somewhat old fashioned looking quilt. I found another piece of muslin that was “tea stained.” JUST RIGHT. I measured it, and had three yards. I spent all night trying to figure out how three yards could be reconfigured to use for the backing. It was just not enough, no matter which way I turned it. The next morning, BEFORE I went to church, I hit up Joann’s, where they just happened to be having a big sale on muslin, and bought two yards of the same tea stained muslin, and was SO PLEASED with myself. Got home to find that the original piece was five yards?! What the what?? Oh well… NOW I have three yards of the stuff for the next project…

Made my sandwich, and yesterday I wanted to start quilting it. But first I had to play around with what thread to use. It just so happened that I had a bit of batting and muslin in the circular file :), and a LOT of leftover squares and half square triangles from the quilt. I tried out different weights and colors of thread. In the end, I liked my first choice, which says its color is “natural.” But it is a glazed cotton, and I don’t think that that will be very pleasant to sew with. I don’t like the tension/unevenness of the stitches. So I went with the second best, and quilted one square. This morning, I think I am going back to Joann’s or Walmart, or the Sewing Cottage to try to find “natural” in a 40 weight cotton thread. 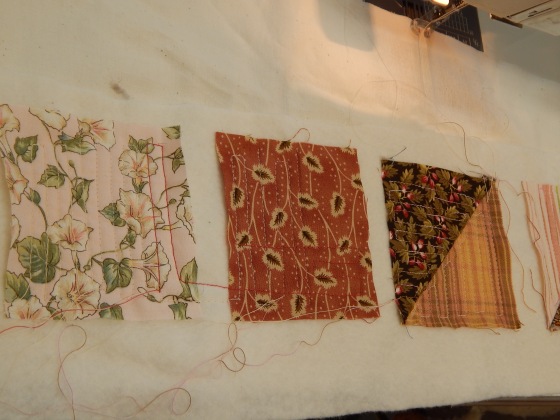