At the end of my Sisters trip, I pieced this together. I simply wanted a background of my hand-dyed fabric to embroider on. I wanted to see how it was to stitch through. (My hand-dyes so far are muslin and Robert Kaufman’s Kona PFD fabric.) I just intended to do some straight line stitching on it. Then it just seemed like it needed some circles. Some of the circles are stitched straight on the fabric, while others have a solid appliqué background. BTW, my hand-dyes are LOVELY to stitch through. Not hard to figure out, since both of those fabrics are not tightly woven.

Since this was a quilt that I started while traveling, and continued to work on at home and in my travels, this seemed like the perfect verse. I used variegated thread for the lettering. I should probably stop doing that…

I do love my little circles. I guess you could tell that by the amount of pictures I take of them 🙂

For these circles, I made a rule that I could only use the running stitch (of course the appliquéd edges are blanket stitch.)

I put a question mark after “Finished?” in the title, because I think this little piece might need a bit more quilting in the background.

Here is one more look at a quilt I think I already shared with you. It is bound now, and it really is finished.

I am trying to finish up some “almost done” quilts. So I can start new ones without the guilt LOL. Anyway, I worked steadily on the little tree from my recent retreat, and it is completed. I was looking for a verse with the word “tree” in it (for a different quilt) and I came upon this Proverb, which I thought was just perfect for this little quilt. I added back some smaller red dots, and it looked just right to me. 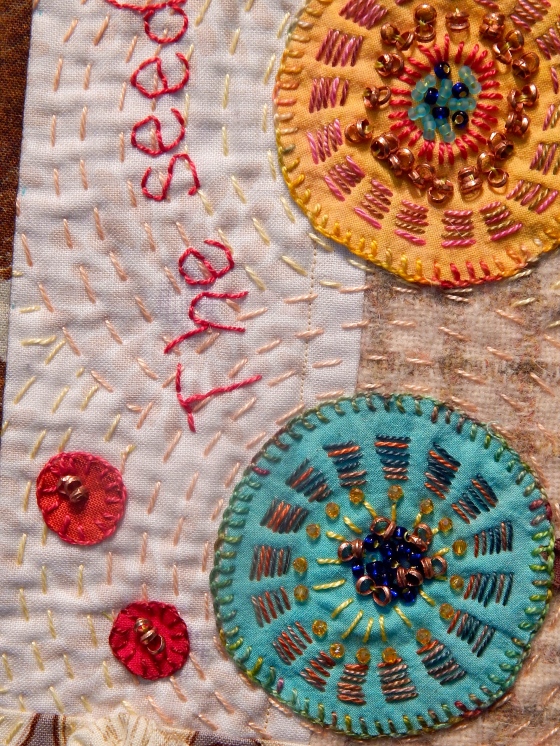 Except for sewing the five background pieces together by machine, this little piece is all hand-sewn. The kantha embroidery and blanket stitch edging are done just through the top and batting, while the quilting lines were done through all three layers.

Tacked the yoyo’s down. 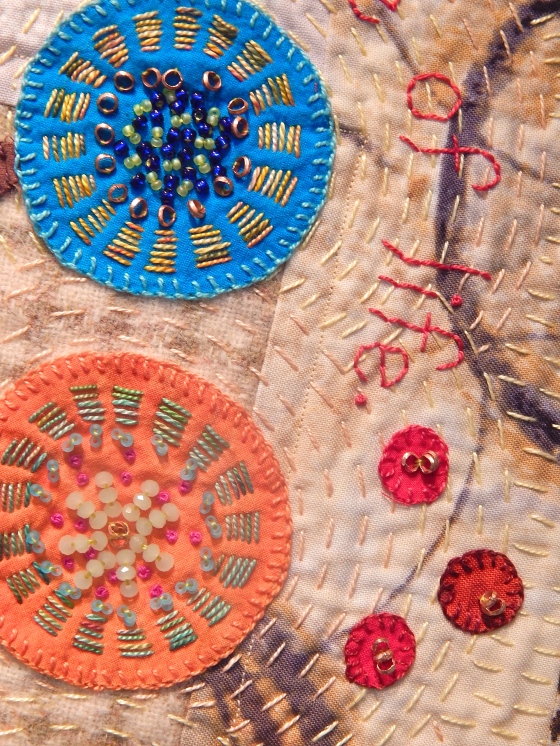 And added some “seed pods” to the little red circles.

Amidst all of the construction of the past few months, I have been able to work here and there in the studio. Not in an organized fashion so much, or as consistently as I would like, but enough to keep the creative juices alive. So when it came time for the sheetrock installation, and that involved my toilet being removed for a few days, I decided to take a little spiritual/creative retreat. Oh, what a good idea that was! I was only here for about half an hour after the sheet rock work started–kind of like being at the dentists–eeeek!

I thought I’d share the evolution of my “creativity” on the retreat. BTW, I went to a great little place in Lake Tahoe that I have gone to before–3 Peaks Resort. I had rented a regular room, but as I heard the customer in front of me discussing a “suite,” I asked how much it would be to upgrade to a suite. It was $30/night. I did think about it for a bit, but decided that for $150 total, it would be well worth it to be able to spread out a bit, and to have a kitchen for my food.

I took a lot of stuff with me. I had one collection of fabrics that I had put together at the end of my Sisters trip.

I gathered another pile of interesting prints and solids in darker colors. I had my zip lock baggies of Cherrywood scraps (LOVE these.) And I brought what I thought would be good background/neutral fabrics. Oh, and a couple of squares of wool that I had nabbed at PIQF, and of course a case of my beloved perle cotton thread. And a couple of journals, my sewing machine, and of course some magazines and books for inspiration. 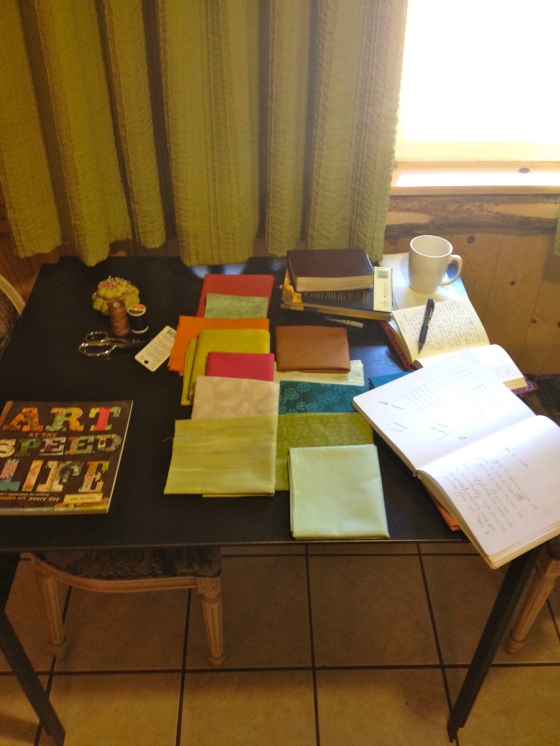 DAY ONE: I had some general ideas of what I wanted to do. I started out with this checkerboard. I thought if the strips were cut unevenly, they might look sort of woven. 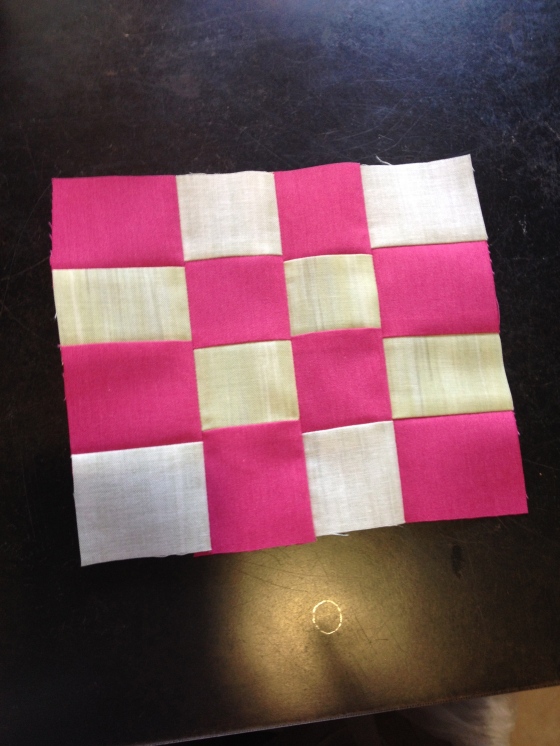 Ick. That was so dismal that I almost went into that spiral “what made you think you were an artist? You’ll never be able to create anything worthwhile. etc.” You all know the drill.

That afternoon I regrouped. I put together the original set of fabrics, and decided to make a strip set of them, to use in creating SOMETHING. I have found that cutting into the fabric is key to moving forward. So I will generally cut strips and/or pieces out of the fabrics that I want to use. I don’t know the end use, and that may lead to some waste, but at least I start moving forward. And that was enough work for one day.

DAY TWO: I cut some bigger pieces of those “neutral background fabrics” and started inserting the strips I had cut from the strip set fabric. The kitchen floor worked pretty well as a design wall 🙂

In the afternoon, I decided to put together a little composition so I would have something to embroider on in the evenings. I also wanted to use that square of wool that I had brought with me. I remembered a “kantha tree” I had sketched in one of my journals from a photo of an actual Indian kantha quilt. (The “border” there is just the backing that I fold over to the front to keep the edges neat while I am hand stitching.

DAY THREE: I decided I wanted to work with some of the other fabrics I had brought, so I cut various sized strips and made square-in-a-square blocks with crosses inserted two ways. Very fun. But tedious. 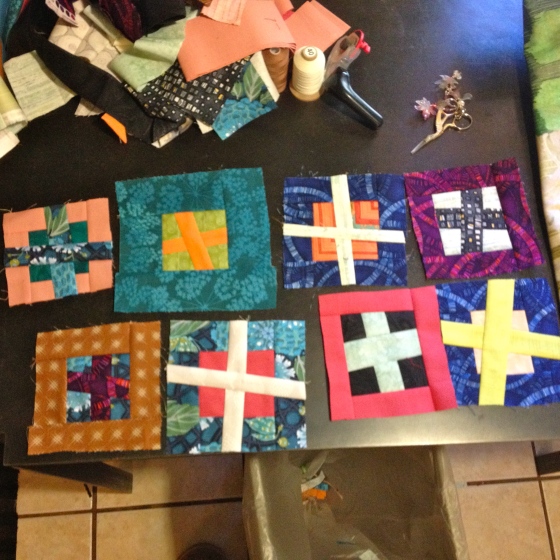 Back to the kantha tree. I thought it needed a little more color.

Eek. TOO MANY red dots. Took them off right after snapping this photo.

Playing with the squares on my “design wall”: 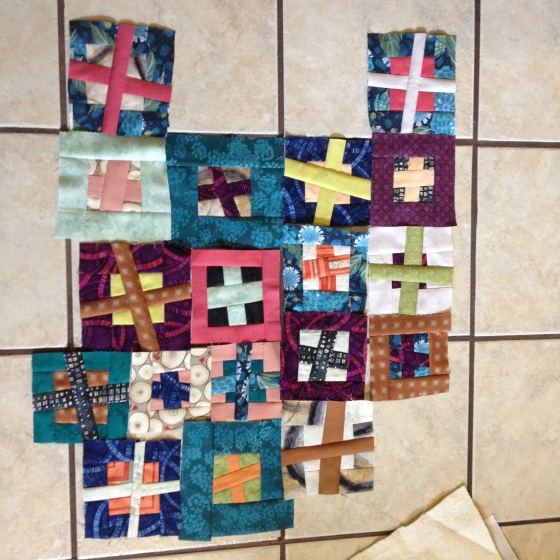 DAY FOUR: I had tired of making the little squares. But I had a lot of strips still left. Just did some big log cabin style squares to use up the strips. I actually like these big squares very much.

DAY FIVE: Back to the original composition. I wasn’t that happy with it. So I tried adding some “borders” to it (greatly improved,) and then, surprise! I cut out and added some circles to it. I didn’t have my zig zag machine with me, so that was as far as this piece was going to go on this trip.

In the afternoon, I went out for my usual cup of coffee, and Hey! Is that a bead store I see over there?? I indulged myself with a few types of beads, and then bought one spool of beading thread and a pack of those little blanket thingies that make beading so easy. Usually, buying the beads is as far as I go 😦 So I made myself get them out and start adding some to my little kantha tree. 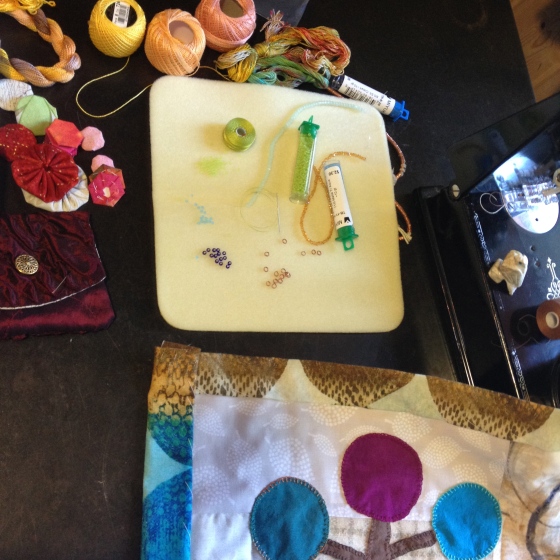 Hey, this beading actually goes faster than my hand-stitching! Who knew?

BTW, I sew those circles on raw-edge with no fusible. The perle cotton keeps the edges nicely in place.

DAY SIX: I had seen an article in a magazine about adding circles and cross-cutting the fabric. Kinda like what I’ve already done with my crosses, but taking it a step further. I didn’t follow the instructions in the magazine, and I didn’t get the same results as they had shown. But it was pretty fun. And might be something I keep in my arsenal. This piece, as well as the big log cabin blocks, and the little square-in-square blocks are all from the same group of fabrics. So they might end up in the same composition, or they might be used for all different quilts. I’m considering them “parts department” a la Freddy and Gwenny. 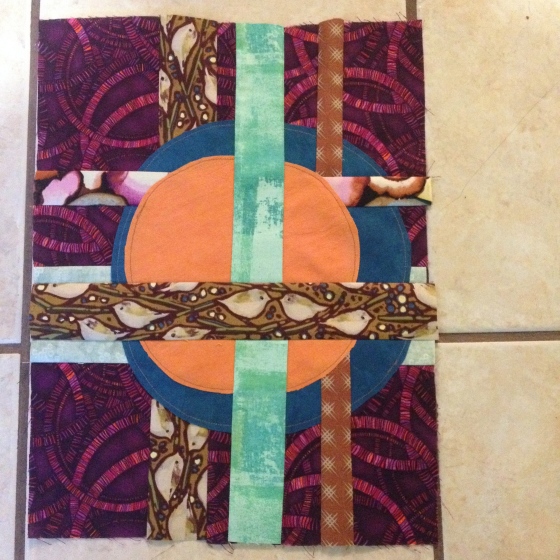 Ooh, and in my little box of sewing supplies, I found a few yo yo’s that I had made on my Sister’s trip. I auditioned them on the Kantha tree quilt. 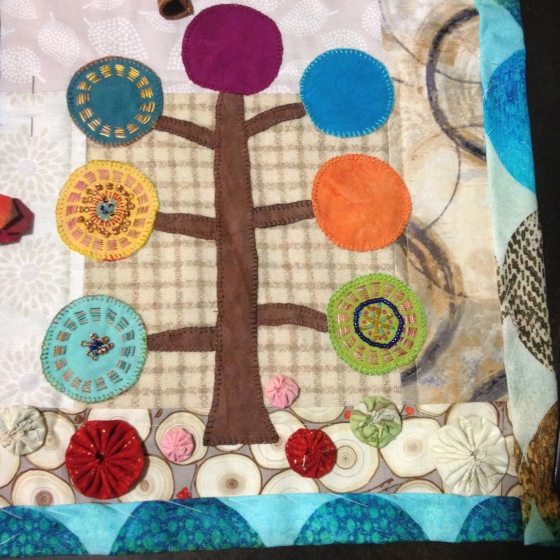 Thus ended my little retreat. It was a very beneficial trip. It seems that someone who lives alone would not have to leave home to have a quilting retreat. But (aside from the construction) there are always distractions and responsibilities at home. It is good to get away and have no other responsibilities than being creative!