I’ve just been doing a variety of fun projects this month. Finishing some very old projects and playing with some new ones. This is a quilt top I finished a LONG time ago. Its so pretty, and I finally made a sandwich and got it quilted and bound. I don’t think you can see, but the squares are put on there raw edge, so there is a bit of raggedness to it, which I think adds to the charm. I know I did this from a pattern, so that’s how I know it was a long time ago. 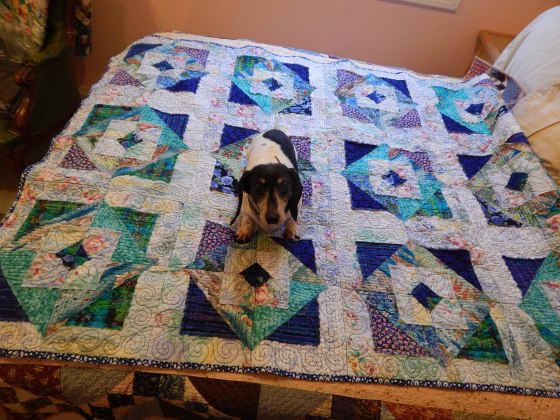 You all know about my box of 2″ squares, right? Well one day in church I doodled this. It seemed like it might be a fun way to use up some of those squares. But then I realized it might be a bit harder to piece than I imagined. One night I dreamed about it all night (that’s what it seemed like) but by the morning I knew how it needed to be made. So I tried it out. This is about a 16 inch block. I’m thinking about making either 5 or 9 of them to make a big 9 patch throw.

Then I had made all these “sparkly” blocks a long time ago with a lot of hand dyed fabrics and some other commercial fabrics. I had them all put away neatly in a project box. But the thrill was gone. I didn’t really want to make a lot more of these blocks. So I came up with the idea of setting them into a blackish background. Luckily for me, Joann’s had just the right black sparkly fabric.

Its always a bit of a puzzle to piece these things together. It took a couple of days, but finally it was done. I had enough of the sparkly fabrics left in the project box to piece a background together.

My friend who has been working on this home for women recovering from drug addiction (remember I donated a couple of quilts for this) had an open house Saturday. It was fun to see my quilts in the setting.

I finally got out my owl rug hooking and started working on that this week, just to make sure I still knew how to hook loops. I do.

Does everybody know that January is rug hooking month for me? I go to Anaheim for a rug hooking retreat at the end of the month. For a long time I just didn’t know what I was going to work on. Then the phrase “He owns the cattle on a thousand hills” popped into my mind. I know the phrase from an old Sunday School song. Anyway, I consulted my brother, who knew the whole song, and then pointed out to me that it was in the Bible, and I knew I wanted to hook this. I had the fun idea of looking up cattle from all over the world, and hooking one large cow on each hill (obviously it would not be to scale.) I googled cattle, and found eight different cows I wanted to include in the rug.

Here’s the inspiration for it:

The Lord, the Mighty One, is God,
and he has spoken;
he has summoned all humanity
from where the sun rises to where it sets.
2
From Mount Zion, the perfection of beauty,
God shines in glorious radiance.
3
For all the animals of the forest are mine,
and I own the cattle on a thousand hills.
11
I know every bird on the mountains,
and all the animals of the field are mine.
(The Message— the scampering field mice are my friends.)

Then one day I was driving down the road and I saw a scene I see so many times, and thought, wouldn’t it be great to use the hills right around where I live for the scenery? So one day I stopped on the side of the road, hiked up to the top of the hill, and took this picture. I swear it looks prettier from my car, but this would work.

I had taken another picture of the hills that included a field in the foreground, so I spliced that into the hill picture. I am going to add a small forest to the side of the field, and a lone wolf will represent “the animals of the forest.” Three mice will be “the animals of the field.” But I can draw those in later. I will have plenty to work on for this retreat.

I googled Mount Zion, and this was the first image that came up. I don’t even know if its the real Mt. Zion, I just liked it. It was just like I imagined it in my mind.

Then it was time to draw the pattern and get it enlarged so I could put it on my linen backing. That’s when it got HARD. In the middle of trying to figure out how to get the basic line drawing of the hills onto a piece of paper I almost gave up. I thought, I’m just going to buy a pattern and do that. This is just too hard to figure out. But that’s when I remember that sometimes I just have to sit and think. And then I remembered my clear plastic! And I already had some in my closet. Easy peasy! I fooled around a bit to make the drawing square. Then I was off to the copy place to have it enlarged 300%. That makes it super easy to trace onto the linen.

I know. this looks so simple. How could I have almost given up?
I got ambitious and figured out how to re-size the cattle on my copier, and drew them on the plastic, and then placed them just so on the linen (that already had the hills drawn on it–that’s why there are hill lines through some of the cattle.) I’m so happy to have this much done!
And here’s my pattern, all drawn and ready for my retreat! This is going to be fun!

I think I mentioned before that I’d been working on a hexi project. It turned out to be the perfect project to work on in the evening during the holidays. They are 3/4 inch English Paper Piecing hexis. I ran into some trouble when I tried to do separate pieces and they wouldn’t fit together. It seems impossible, but true. I finally figured out that I was putting some together clockwise, and others counterclockwise. Still, they’re all hexies, they SHOULD fit together. Anyway, that made me paranoid and I decided that I just had to work on putting them all together in one piece. The bigger the piece got, the harder it was to work with. One day in church I got an idea to make a quilt out of them called “I’m Done!”

But they were still in a very weird sorta diamond shape. Not what I envisioned for my new idea. So I put the piece up on the design wall and put my hexies just so to make it the shape I wanted–kind of an amoeba shape. Surprisingly, it was fairly easy to take it up and down off of the design wall and add the extra shapes. I pinned each one carefully with a safety pin so that there was no doubt about where it went and how it needed to fit together.

So here’s my semi-final composition. I still need to decide on a backing fabric, and put it back up on the design wall (thus the picture 🙂 )

In the meantime, I also am working on a kantha blanket. Its just a large print of trees that I really liked, put together with some other really pretty fabrics that I had in my stash.

I’ve progressed much farther than this (just doing straight kantha stitching) and the edges were starting to bug me. I used cotton gauze for the middle of the sandwich instead of batting (to mimic how actual kantha stitching is done). It made the edges very flimsy. So I put the binding on it! Much nicer.

I have so many projects that I am working on right now. Mostly just for fun, and finishing some series, making more quilt sandwiches and doing more quilting. I’ll be back later in the week to share some of these projects!

I wasn’t going to do this, but it is fun to look back and see that you’ve accomplished more than you thought you had. Because of the way I work, most of these were started in other years, and finished this year.

My Noah rug is one of my favorites this year.

This is a little scrap quilt that I made for a woman’s shelter. I actually made a second one but did not document that one.

And “My Flower Garden” made from the leftover strips from the above quilt.

This was a top I made long ago, and just finished quilting this year. (Thank you, Juki!)

Another top I made a LONG time ago, and also just quilted this year.

A little improv scrap quilt. I like this one. I don’t know where it is right now

Dust if you Must–made from an internet poster that was making the rounds. I changed it just a bit to personalize it. 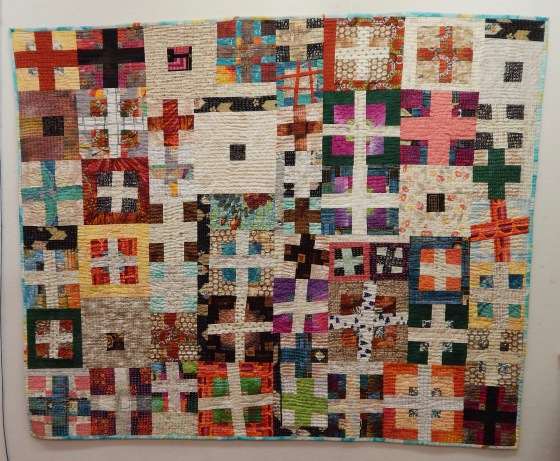 The Light of the World. I enjoyed making this one, and it went fairly quickly.

O Death Where is thy Sting? Finished previously, but the cross was beaded this summer. 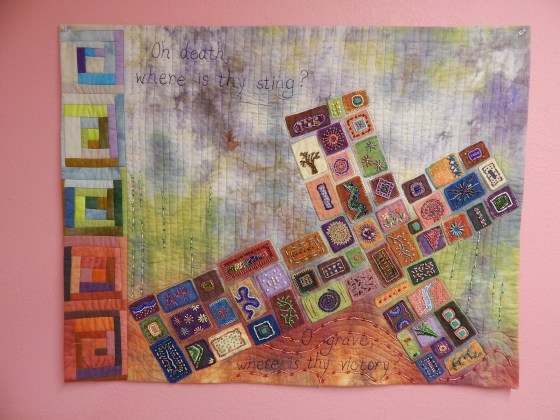 As you might know, many other projects were started this year. I hope that I will be able to finish as many in the coming year.