Later that afternoon, I came home and tried one more time. No more clunks, and I finished the lettering. After dinner I picked out the first letter that was done with the wrong thread, re-did that, and this quilt was finished! (Oh, in case you’re wondering, a lot of the time I put the binding on before I put the lettering on.)

And I realized that at that point I had finished all the quilts that I had planned to finish for this exhibit. SUCH a good feeling. Now, sure, there is another quilt in my mind that I would REALLY like to do, but it will just be a bonus if I do happen to have time to get it done. I am going to a rug hooking retreat next week, which requires that I switch gears, and so it feels very good to have this group of quilts completed.

I made the sandwich for that light cross quilt, and pre-quilted a grid on it. I thought that that might make the piece look more finished  once I put the lettering on it. I actually hated the grid after I got it done (but after all the lettering was on, I liked it again.)

Then I began the tedious job of putting the lettering on. I actually mostly like this tedious job. It involves a bit of measuring and counting, and that appeals to my mathematical side. I measured the lines at 1 1/2 inches, and used Gwen Marston’s “thumbnail method” of marking the lines. And then I used my blue pen to actually write the lettering carefully. I used dark brown thread, and planned to go over the lettering twice to make it as visible as I intended for it to be (sometimes I don’t want the words to be as visible.) In the mark once, check twice department, halfway through the stitching, I decided I needed to check the wording against my Bible. And sure enough, I had left out an entire line!! Thank goodness I found it right BEFORE I stitched it. I just had to erase all those lines of blue lettering by spritzing it with water, and wait for it to dry, and then finish the lettering.

And then this quilt. My problem child. I did this BIG quilt quite a while ago. And then I decided that I should put a lot of kantha stitching at the bottom, indicating the world. Halfway through all that stitching, I didn’t really like it. But I stubbornly continued on. And of course, the stitching really skewed an already lopsided quilt. And THEN, where I  wanted to put the simple lettering  (GOD SO LOVED THE WORLD,) there was a purple stick of fabric that would be right in the way.

Well, I’m getting down to the deadline for this exhibit*, and so I got this quilt out ONE. MORE. TIME. I remembered that I could appliqué a patch of background color over the stick, and with the lettering over it, it wouldn’t even be noticeable. And then, with my experience of the past couple of quilts, where I have blocked them on my design wall, I was able to spray it lightly with water, and do a decent job of blocking some of the skewy-ness out of it.

Here’s where I put the patch–that purple stick of fabric continued up and would have interfered with the lettering.

*The Signature of Jesus series, and The Psalms series will be exhibited at Oak Hills Church in Folsom from February 22 through March 15.

Starting a new project is the most fun, isn’t it? Actually, just planning and dreaming about the new project is the MOST fun. Then you start and it takes a lot longer than it did in your imagination. By the end, sometimes it is just a labor to get it finished. At my best, I try to take enjoyment in each stitch. At my worst, I simply put the project away and try to forget about it 🙂

Anyway, I have been on a creative jag this week. Who knew that taking an artist’s holiday could be so good for your creativity? I always worry that I will never have another creative idea in my life. But then, as Jerry Seinfeld says about appetites, another one always comes along. 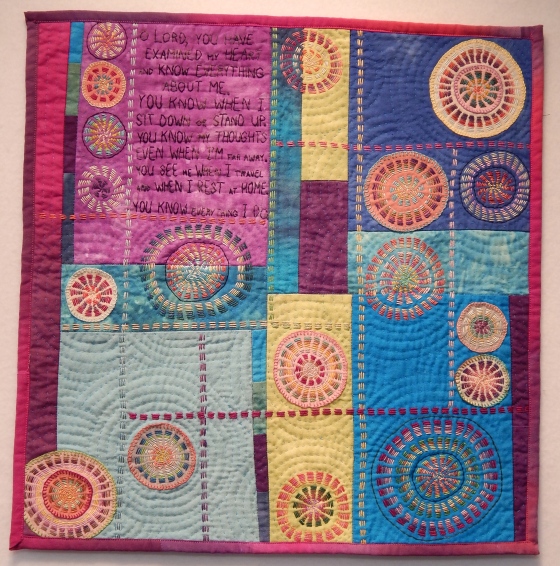 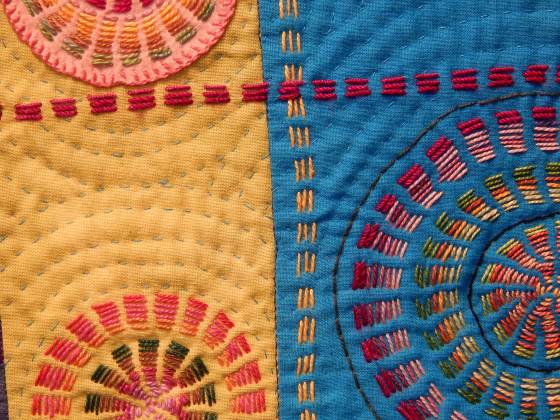 I’ve been working on my “double cross” rug almost every evening. I finished the darker maroon crosses, and then I decided to do a simple, scrappy treatment on the alternate crosses, bringing in the blue that occasionally showed up in the maroon crosses, and also so it will be useful in my house. I don’t have maroon, but I have plenty of blue. I finished the last blue cross last night!

And then I did a background top for a quilt I’ve wanted to make for a long time, containing all the words from a “poem” in Colossians 1. Twenty-six lines of writing. Here’s what I did–just did a log cabin/housetop type of rectangle, and then cross cut it to insert the cross. I am pre-quilting it with a grid before I put the words on. I’m planning to use script, and do the wording by machine. 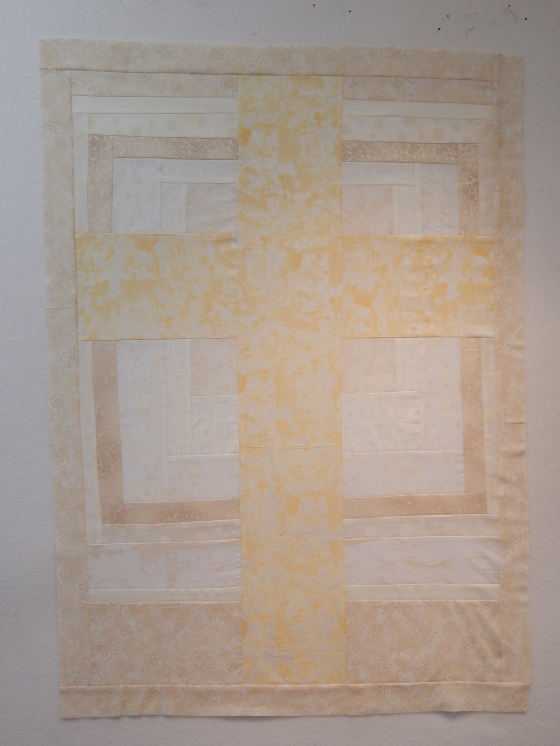 I started two other new projects this week, if you can believe it! I will show you those soon.

I might have showed you this one before. But at some point it got put away, and I never finished the quilting on it. I knew exactly what I wanted to do–I had to make the writing and the lilies show up by quilting “wood grain” into the cross. I got it out, did a little scribble practice on my sampler sandwich (I always keep a little square ready to try out new designs. Gives me confidence in going to the actual quilt,) and went to town. I was most anxious to get this one done and soaked, because I had used blue pen for the writing and the lilies. And then I had to fairly carefully block it, because of course, the more intense quilting wanted to draw up. I soaked and spun it out in my washing machine, and then blocked it directly on the design wall. Please don’t ask me if I used rulers or anything 🙂

In the middle of that artist’s holiday, inspiration struck me! I was looking through a book called Quilted Planet, when a certain quilt struck my fancy. 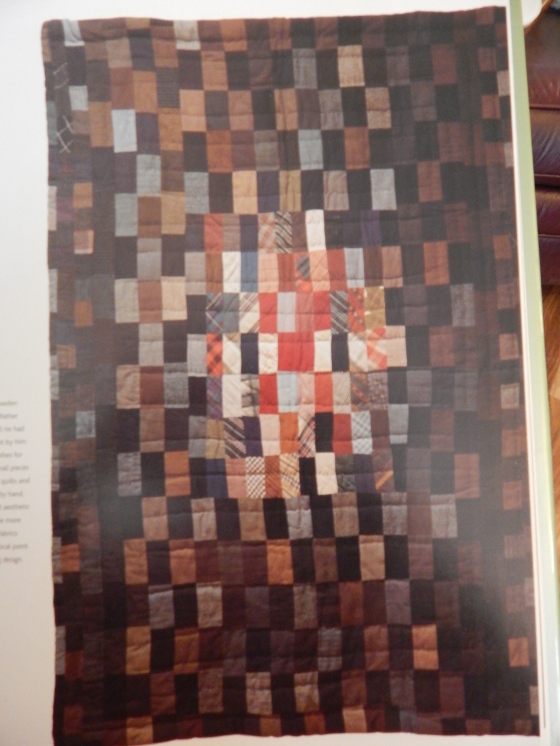 It really just brought to mind an old idea I had, based on the words at the end of the poem in John 1 “The light shines in the darkness, and the darkness can never extinguish it.” I’d had in mind a cross (for the series The Signature of Jesus) shining in the darkness. When I see a quilt that inspires me, in general I just keep the idea in the back of my mind, and on purpose, I don’t go back and look at it, so I will be doing my own work.

I took from this quilt the idea of using rectangles as a construction unit. And this time I even wanted them to be all the same size, so I found a template that would work, and got out my big box of scraps, and cut out a million rectangles. All different colors for the cross, and a variety of neutrals, shading from beige to gray to black for the background. I worked quite a while on this piece on the design wall, and it was not coming out at all what I envisioned it to be. I knew it was a problem of values, but sometimes I get stuck on the fabric and I don’t want to change. I almost gave up, but then I found my original inspiration, and tried one more time. I cut out a lot more light and dark squares, and ta da! I am very pleased with the outcome.

I started quilting it, and then, AS USUAL, struck a road block. I did not know how I was going to quilt it. Fortunately, I had another quilt waiting in the wings for some finishing quilting, so I got that out and completely finished it!

And in the meantime, I decided on a simple plan for quilting the dark cross. Don’t you just love quilting?